On a bright May morning we gathered in the foyer of The Marlowe Theatre and then made our way to The Marlowe Kit, where the Chairman, Professor Ken Pickering, informed us that Marlowe would have walked past the former Poor Priests’ Hospital, as his only extant signature was found in the building next door. Ken then read one of Marlowe’s lesser-known but charming poems: ‘I walk’d along a stream, for pureness rare.’ This was very fitting as The Kit is next to the river Stour, and we later threw flowers and rosemary into the water in his memory.

One of the highlights of the day was listening to sections of Purcell’s ‘The Faerie Queen’ by the Marlowe Consort led by John Perfect. The libretto is an adaptation of A Midsummer Night’s Dream, but the music was used independently of the play during scene changes, as they didn’t normally raise the curtain between acts. The fairies were originally played by 8-year olds, and it was possible to imagine them dancing on the stage to the lively melody.

It was a real treat and a great pleasure to hear Frank Barrie give a talk about some of the highlights of his long and distinguished acting career. Frank has worked with the most iconic names in British theatre, starred in 36 productions of Shakespeare plays in 67 countries, was a leading member of Laurence Olivier’s National Theatre Company at the Old Vic, and has made over 200 TV appearances.

Frank said that he admires Shakespeare because he expresses every emotion in the most beautiful and exact language, and his characters are so alive and real, more so than many people we meet. He particularly enjoyed playing Hamlet because everyone can identify with him. Similarly, the story of Macbeth’s rise and fall has connected with audiences in many places over the last 400 years. For example, Frank told us about his performance of Macbeth in Baghdad during the rule of Saddam Hussein. At first, the audience did not take the play very seriously; they were shouting, joining in, walking in front of the stage and responding to impressive acting points. However, when they realised what the play was about and how it related to their own lives, they went quiet and there was a huge applause at the end. The next day crowds of people arrived to see the performance, as word of its significance had spread quickly. Unfortunately, the secret police were in the audience this time, and the company was forbidden from performing the Scottish play again because it was considered to be too dangerous – a sign of the extraordinary power of Shakespeare to communicate with modern audiences.

On a lighter note, Frank gave a series of fantastic performances and entertaining anecdotes about an onstage swordfight that went wrong, a bomb exploding outside the theatre, and a collapsing bed!

Lunch was served at an excellent restaurant in a peaceful riverside setting.

Paul Allain started his informative talk by describing the different phases of the Polish film director’s career and the ideas behind his work, in particular ‘Poor Theatre’, which focuses simply on the relationship between the actor and spectator. Actors trained in this method concentrate less on techniques and more on revealing their true selves through the role.

Paul explained that people were astounded by Grotowski’s ground-breaking production of Doctor Faustus in 1963 and it received mixed reviews, with one British critic finding it ‘uncomfortable’. The 9 minute film of the play helped us to understand why it was so challenging: the rehearsals and performance were clearly very physically and emotionally taxing for the actors, and the spectators were in an intimate space with the protagonist, for example sitting at tables at Faustus’ Last Supper. Faustus was played as a blasphemous, Christ-like figure. The film captured the sinister atmosphere in the theatre, and many of us were struck by the way Mephistopheles was presented as an ambiguous mixture of male and female, good and evil. It is clearly still a very thought-provoking production!

Ricky Dukes is the Artistic Director of the Lazarus Theatre Company and he recently directed Edward II at venues including the Greenwich Theatre. Many members of the Society had seen the performances, but there were photos for those who hadn’t. Ricky talked us through how the company made decisions about the staging of Marlowe’s history play, for instance the creative ideas they considered and rejected and the conversations about which sections to cut or include in the 90 minutes running time. They decided on a Brechtian design, set in the context of harsh, masculine, brutal England, and the relationship between Edward and Gaveston was portrayed in a sympathetic light.

Geoff Doel started the discussion by asking Ricky to explain some of his directing choices. Geoff disagreed with many of those choices, and this sparked a larger, robust debate with Ken, Jo and members of the audience. The discussion was essentially about ‘modern’ vs ‘traditional’ staging and interpretations, and it continued well after Marlowe Day had finished! Drama is based on conflict, so this was a very apt end to the day! 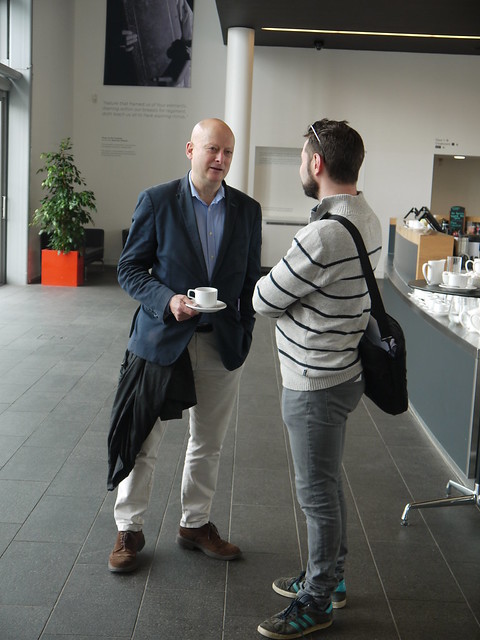 Edward II to be re-released

The rights to the 1991 drama, Edward II by Derek Jarman, have been nabbed by distributor; Film Movement. They are set to give this fantastic story, based on the 16th century play, a limited theatrical run in North America and a release on digital formats.

The film stars Steven Waddington and Tilda Swinton in modern day England as Edward II and Isabella respectivley. The film centres around Britian’s only openly gay monarch, originally written as a play by our very own Christopher Marlowe.

Read the original article on screendaily.com

Hero and Her Paper Navy

Hero and Her Paper Navy

Join Hero, an intrepid Elizabethan explorer, as she takes on a nautical adventure in search of new worlds, treasured words and long-lasting friendship. Based loosely on Christopher Marlowe’s epic poem, Hero and Leander, there is no better time to introduce today’s kids to yesterday’s masterpieces in a fun-filled educational journey.

London Marlowe Day took place on the 24th February, 2018 at the King & Queen Pub in London. After the AGM of the Marlowe Society, there were several interesting talks, sharing of information and news items, and a delicious fish and chips lunch.

We commenced with reports from members of the committee and then moved on to the election of officers. The details of the elections can be found in the Chairman’s Spring Letter. Ken Pickering filled us in on exciting plans to move our library at Faversham to the new Marlowe Kit in Canterbury. We also heard from Julian Ng about his ideas for the future of the website, including how he will be using his marketing expertise to help promote and raise funds for the Society.

Malcolm Elliott’s Christopher Shakespeare: the man behind the plays

Following the AGM, Malcolm Elliott, historian, lecturer, Quaker and Marlowe Society member gave a talk about his book Christopher Shakespeare: the man behind the plays. Elliott explained that Marlowe did not die in Deptford in 1593, but lived the rest of his life undercover, and wrote the sonnets and plays normally attributed to Shakespeare when he was in exile abroad. Some sonnets appear to describe Marlowe’s feelings on his travels across Europe, as he laments the loss of his friends and Walsingham in particular. Elliott also asserts in the book that only someone with intimate knowledge of the French court of Navarre and cities in northern Italy could have written Love’s Labour’s Lost, Romeo and Juliet, The Taming of the Shrew, The Two Gentlemen of Verona and The Merchant of Venice. One particularly intriguing claim is that no one in England knew of Don Virginio Orsino, Duke of Bracciano’s presence in England until two weeks before Twelfth Night was performed for him and the Queen on 6 January 1601, so it is inconceivable that Shakespeare could have written it at such short notice. It seems more likely that Marlowe, who was probably in the service of Bracciano and knew of the visit in advance, wrote the play. If Marlowe accompanied the trip to England, he would have been in disguise for his own safety, and disguise is a familiar theme in plays thought to be written by Shakespeare.

After the talk, there was a question and answer session. However, the end of the talk felt like a beginning for me, as I’m sure the book could stimulate more research, particularly on who was working at the famous French and Italian courts when these plays were written.

The lunch was enjoyed by all and was a great opportunity to discuss ideas about the forward-thinking plans for the Society outlined in the AGM and also the implications of Malcolm’s book.

Dr Ildiko Solti’s talk: ‘The Politics of the Bear-Pit: Marlowe and Shakespeare in shared light’

Dr Solti, a long-standing member of the Marlowe Society and Fellow of Kingston University, explored how Marlowe and Shakespeare used theatrical space and how they worked the audience.

Ildiko started her talk by explaining how animal baiting pits full of blood and adrenaline in the morning were transformed into theatres in the afternoon. The level of excitement remained in the theatre because it was (and still is) a marked space with daily life outside and different rules inside. During the talk we were encouraged to really think about how we might explore a space when we enter into it, like a curious but apprehensive animal would when it comes out of its hole and looks around a new area. In a theatre we can experience that primitive ‘fight or flight’ instinct because as an audience member you could feel uncomfortable – perhaps as a confidante, implicated in the action, or you may feel provoked by the action. Marlowe seems to enjoy stretching and challenging his audience by a preference for the outrageous, and involving them in impossible-to-solve moral dilemmas.

Dr Solti suggested that a great way of fully understanding what it was like to walk into an Elizabethan theatre and enjoy the feeling of being immersed it, is to watch the film Shakespeare in Love. The theatrical space is so important because it shapes the meaning of the play and, of course, the most important moment can be inarticulate. Similarly, movement can construct meaning, rather than just be illustrative of it. The talk was a real eye-opener and it helped us to understand that Marlowe was a true master of space, not just the mighty line.

During the day we heard about performances of Doctor Faustus at the University of Malta and in Brazil. Marlowe’s fame is clearly growing around the world! It was also interesting to hear about the new Shakespeare Theatre in Gdańsk, Poland, which is built on the site of a 17th century theatre, known as the Fencing School, where English travelling players performed.

A representative sharing all the exciting changes for The Rose Theatre Bankside.

Support the Marlowe Society and get more benefits by becoming a member today.

There are no users currently online